The current crypto-currency and NFT hype seems to stop at absolutely nothing. Plastic collectibles company Funko announced a new collection of Bob-Ross-themed NFTs in collaboration with “Pop Culture NFT Marketplace” Droppp.io.
And Bob Ross fans around the globe are not happy about it.

What In Bob’s Mighty Hair Is An NFT?

“NFT” is short for Non-Fungible Token. An NFT is a little bit of unique and non-interchangeable data stored on a blockchain like the Ethereum or Cardano blockchain. You can buy these NFTs in exchange for cryptocurrency and keep them in your crypto wallet. NFTs are most often used for pieces of virtual art.

Let me put it this way: people are paying thousands of dollars in cryptocurrency (think of it as virtual dollars with extreme volatility in price) to be able to say they own a picture on the internet. Of course, this doesn’t stop anyone from just saving these pics to their own computers. They also don’t really own the pictures but only a web link to the pictures on the internet.

If this doesn’t make any sense to you don’t beat yourself up. You’re not stupid. NFTs are mostly used for speculation and are probably the best example for the “greater fool theory“.

With people paying that much money for easily created online pictures it was only a question of time until someone used Bob Ross’ name and image to make a quick buck. In this case it is the Funko company, best known for their “POP” collectibles. It is not known if the company managing the painters name and image Bob Ross Inc. has anything to do with the project.

On December 14th they published this tweet, referencing “Bob Ross’ legacy of creating and investing in the art of painting”:

Bob Ross Was A Business Man, Not An Investor

When Funko talks about Bob’s legacy of investing in art and the art of painting they could not have been more wrong. Bob didn’t want anyone to buy his paintings or “invest” in them. He wanted people to buy his painting supplies and create their own artworks, teaching them the skills needed to do so.

To this day it is almost impossible to buy an original Bob Ross painting. That’s how much he wanted you to pick up that brush and get painting yourself! If you want to learn how to paint check out our list of the five easiest beginner Bob Ross paintings.

Destroying Bob’s Favorite Thing In The World For Profit

Keeping the blockchains NFTs are saved on running burns a whole bunch of energy. The bitcoin blockchain alone uses as much energy as the whole country of Finland, a nation of 5.5 million people. And that’s without all the hardware and e-waste created by the various computation hardware that is needed by miners around the world to keep the crypto machine going. Well played Funko, we’re sure Bob Ross would have loved that! But at least we have some cool NFTs to remind of all those happy little trees that used to grow. 😊

It is well know that Bob did not want his name and image to be used for mindless generation of profit. So the creation (or minting, how it is called in NFT terms) goes directly against one of the last wishes he made before succumbing to cancer in 1995.

The Reactions – People Are Not Happy

As you can image, the reactions to the twitter announcement are everything but positive. But see for yourself

Bob Ross: His program consisted of him talking about his love for the things he created paintings of: Trees, mountains, clouds, lakes and snow.

You: Decide it would be a wonderful idea to create NFTs off of his late name. Which burn down rainforests and damage the planet. pic.twitter.com/FNB7D5gtZ1

While it doesn’t look like anyone would want to buy overpriced digital Bob Ross trading cards they are already sold out on the droppp.io website. What a strange time we live in. 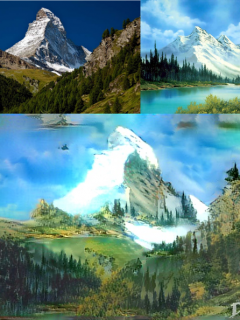 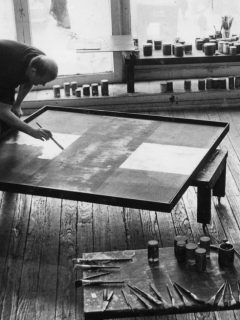 Next
Ad Reinhardt - What's The Deal With Modern Art?